By Shannon DennyJanuary 11, 2023No Comments

Sarah Jenny Johnson is a filmmaker with a background in fashion and music videos. Here she talks to Sister Motion about making the leap to creating films that align with her passion for social issues, marginalised voices and activism.

“I’m from Cheshire and I’m based in Manchester, close to the centre. I’ve left and come back about a million times for work and travel, but I always seem to end up back here. ”

I’m from Cheshire and I’m based in Manchester, close to the centre. I’ve left and come back about a million times for work and travel, but I always seem to end up back here. We’ve had our ups and downs, me and Manchester, but I’m fully back in love with it now.

It is as creative a city as people say?

It really is. What’s great about it is that it’s such a walkable city. You can literally just take off through all the different parts of town, bump into people that you know and yet still see something round the corner that you didn’t know was there. It’s a really lovely place.

You describe yourself as a “self-shooting video producer”. What does that mean in lay terms?

Self-shooting just means I will go and make some sort of short film or video and shoot it myself. I film it the way I think it should be filmed and produce it. There would obviously be other people in the crew or on the set, but I’m operating the camera.

Would it be safe to say your path into filmmaking took some unusual turns?

I did film studies at uni but that was film theory and history. I think I just picked it because I really loved going to the cinema! I really didn’t put more thought into the decision than that – why do you have to make these choices when you’re like 17? I vividly remember in third year being offered the option to do practical filmmaking and I was like, “Ah no, I won’t need that!” So I didn’t really start doing video production till I was about 27 or 28.

How did you break into the industry?

I used to work in a photography studio doing admin, and someone there moved on to managing a fashion photography studio. He gave me a job filming models on a catwalk for a fast fashion brand, so I used to do that every day for about two or three years. Then they moved me into their creative department, so I filmed their YouTube videos and would go off and help with their TV ads, which was amazing. 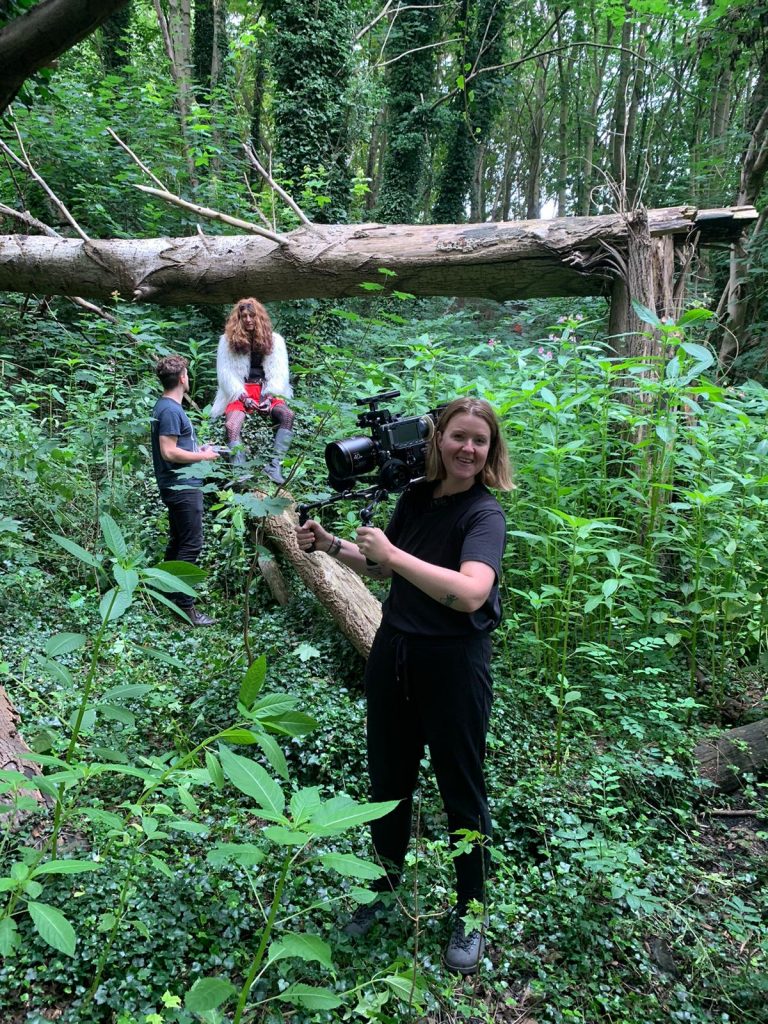 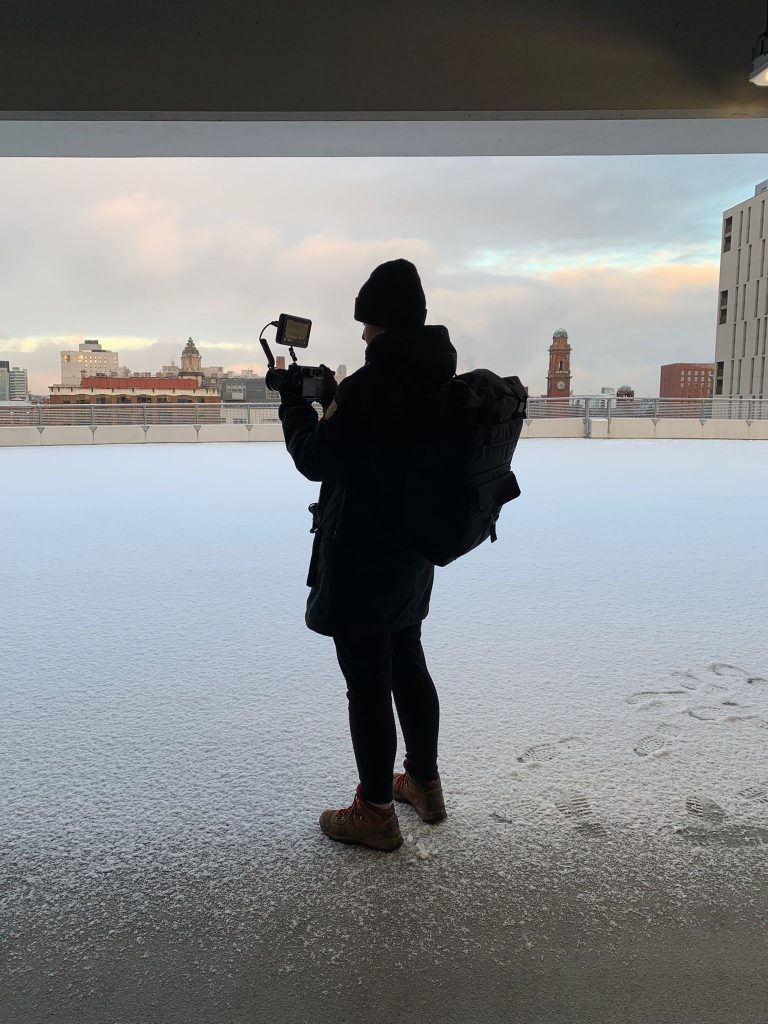 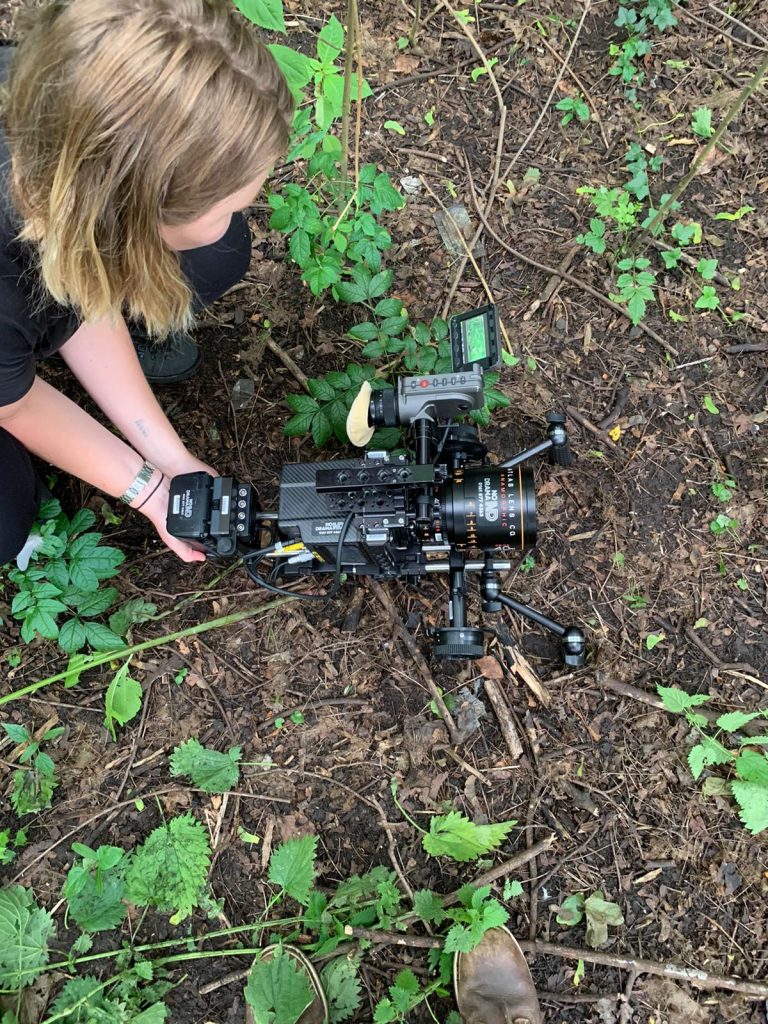 “I can walk onto a set with people I don’t know, and if some of them haven’t read the call sheet, then they don’t expect a woman to be holding up a massive camera. They’re like, “Oh you must be hair and makeup!” “

People tend to think of London and Bristol as the hubs for film, video and TV. What’s it like being based outside of these centres?

The good thing about it workwise is you get to know people a lot more easily, because you see the same people more regularly in Manchester. There’s a lot of fast fashion stuff up here, so if you’re interested in trying to get into film and video through that – which is what I did – it’s great. You can get a lot of jobs just through word of mouth, and that’s quite nice.

Now that you’re freelance, what kinds of jobs get you excited?

Short form documentary is what I would like to be doing. I’ve done a few things like that this year. I’ve been making three short films about a friend of mine who is trans, so following his transition from six or seven years ago. I worked on the Women’s European Cup, and off the back of that I did a short documentary. I did one for a travel company about a Pride trip – which was great because I got to go on the trip – and I did another one for an Alzheimer’s charity. It would be nice to start getting approached for stuff like that more often.

What challenges have you faced in building a career in this industry?

Not so much in photography but certainly in cinematography, it’s such a boys club! It’s so strange, but it’s so rare to see female DOPs doing really, really well. It’s slowly, slowly changing, but it’s definitely a struggle there. I can walk onto a set with people I don’t know, and if some of them haven’t read the call sheet, then they don’t expect a woman to be holding up a massive camera. They’re like, “Oh you must be hair and makeup!”

What’s the vibe like on those very heavily male sets?

There’s often such a focus on the tech, and they all try and out-spec each other. Like you’ll hear them say, “Oh what camera have you got, what lenses?” But actually if you turned around and asked them to film this really sensitive documentary or direct this model who feels a little bit awkward, they wouldn’t have any clue how to do it, because what lenses you’ve got seems to be the important thing! The value on creativity or being able to make a film can become a little bit unbalanced by the emphasis on how big your lens is.

You worked with Sister Motion on a shoot last year. What was that like?

It was really cool! We were doing a behind the scenes film for a big TV ad campaign, an advert with three different scenarios about stereotyping. We were filming the advert being shot and interviews with the cast, crew and certain members of the production team. It was about five days shooting in total and all the camera crew were women. That was really cool to see.

While documentary is what I would like to do, I’m still really happy doing fashion jobs. If I can do some work that’s really meaningful and get to do some fun fashion stuff throughout the year, then I can find a balance. This past year I’ve been so lucky with the variety of stuff that I’ve got. I can feel myself getting towards the sort of work I want to be doing, and I feel really chuffed about.

What advice do you have for someone hoping to get into the industry?

There are so many ways of getting your work out there. You can literally just pick up a camera and go and do it.

Is there anything in particular that makes you feel hopeful about the future of film, TV and video?

There’s so much good TV at the moment, probably more than film I’d say. I’ve been watching Bad Sisters on Apple TV. It’s an Irish production, a dark, dark comedy with an all-female cast, written by women, directed by women. When you see stuff like that with only women’s names at the end on the credits, that kind of stuff gives me hope.